Stark County – Huddled Up For Business

Stark County was established on February 13, 1808 and named in honor of the oldest surviving general of the Revolutionary War, General John Stark. As of 2016, Stark County has an estimated population of 373,612 people and a land area of 576 square miles or 371,193.9 acres. The U.S. Census ranks Stark County as the 8th largest out of 88 counties in Ohio.

Stark County is home to the communities of Alliance, Canal Fulton, Canton, Jackson Township, Lake Township, Louisville, Massillon, Minerva and North Canton. Located just 60 miles south of Cleveland, Stark County offers most of the amenities of a large city with the advantages of a smaller city. The lower cost of living provides significant advantages to businesses and their employees, and more affordable housing. The Canton-Massillon-Alliance area hosts excellent schools and hospital facilities, and recreation opportunities like access to U.S. National Parks, large lakes for fishing and boating, cultural events and shopping.

Stark County is nationally recognized for serving as the location of the NFL Professional Football Hall of Fame. The area is also the world headquarters for several large corporations including The Timken Company, TimkenSteel, Diebold Nixdorf Corporation, the Kenan Advantage Group, and Shearer’s Foods.  The county is home to hundreds of other service and manufacturing companies that have all recognized the business edge they get from Stark County’s excellent accessibility to the U.S. market and its lower cost of living.

Growing companies like operating in Stark County for several reasons including the availability of a skilled workforce, its transportation hub and low-cost utilities. It is is also home to six colleges and universities that collaborate with businesses to help them innovate and adapt, train and prepare employees for jobs in emerging technologies.

Stark County has a growing reputation for its strong partnerships with the economic development community, education and private industry. Those partnerships have a proven track record of advocating for tax breaks, state and federal support funding, and other financial resources to help business succeed and grow here.

The 2021 Ohio County Profiles, prepared by the State Office of Research, presents demographic and economic statistics associated with business and industry activity, and the amenities and services for Ohio and its 88 counties. The publication provides users with a current overview of Ohio that may be used in business decisions or policy making by business developers, researchers, planners, government leaders and social service agencies as well as the general public. The Official Stark County Profile can be accessed by clicking on the map of Stark County.

All of those successes are great sources of strength and pride for our area, but we have no intention of resting on our laurels. Stark County is well positioned to embrace the future, and we eagerly move forward into the new economy focused on companies in advanced manufacturing and new emerging technologies like fuel cells, wind energy and oil shale exploration and development.

Stark County is strategically located in Northeast Ohio which serves as the crossroads of the Eastern and Midwestern U.S. markets. Stark County’s network of highways provides easy access to other major Ohio cities and to the larger cities and markets of the Midwest and East Coast including Cleveland, Columbus, Cincinnati, Detroit, Indianapolis, Chicago, Pittsburgh, Buffalo, Philadelphia, New York City, Boston and Washington, D.C.

Among the interstate highways providing access to the U.S. are included I-77, U.S. Route 30 that links to I-71, Interstate 76 near Akron and the Ohio Turnpike that links to I-76 and to I-80 to the East Coast. Additionally, the Akron-Canton Airport (CAK), located just west of I-77 between Canton and Akron, offers the lowest average airline fares in Ohio. CAK provides nonstop air service to 11 cities in the U.S. and access to the world with only one-stop.

Akron-Canton Airport is a better way to go® - for you.  Over that last 10 years, they have redesigned and updated the airport to better serve the public so we can have the best experience possible. Improvements include gate modernization and expansion, ticket wing and visitiors information center renovations, upgraded entrance road, and a new covered parking lot.

Stark County is strategically located at the crossroads of the Eastern and Midwestern U.S. markets.

Within 500 Miles of the Stark County Regional Market

When you locate in Ohio, you'll build a profitable business.

A business-friendly tax environment is an absolute must in today’s economy. In Ohio, we’re doing something about it.

And the state’s Commercial Activity Tax is a low .26% on gross receipts exceeding $1 million.

Ohio’s tax on new investment is the lowest in the Midwest, and EY research shows that our 4.4% effective rate ranks Ohio as the third friendliest tax environment in the nation. 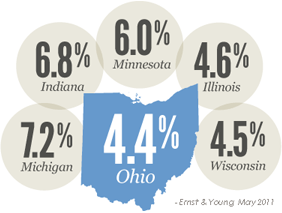